The sunflower lemma describes an interesting combinatorial property of set families: any large family of small sets must contain a large sunflower—a sub-family consisting of sets

with a shared core

The lemma was first proved by Erdős-Rado in 1960, who gave the quantitative bound that among

distinct sets each of size at most

sets forming a sunflower. Erdos-Rado conjectured that the

in the bound could be significantly improved to

For nearly 60 years since the Erdős-Rado upper bound, all known upper bounds had had the

despite much research effort. In 2019, a breakthrough work by Alweiss-Lovett-Wu-Zhang improved the bound significantly to

being an absolute constant. The breakthrough led to many new results including improved monotone circuit lower bounds by Cavalar-Kumar-Rossman.

Since the breakthrough of Alweiss-Lovett-Wu-Zhang, researchers have been refining the bound and simplifying the proof. The current best bound is

such that the following holds for all positive integers

be a family of at least

distinct sets each of size at most

sets that form a sunflower.

The aim of this blog post is to present a streamlined proof of Theorem 1. The proof is largely based on a blog post by Terence Tao where he presented an elegant proof of Rao’s result using Shannon entropy. However, Tao’s proof included a trick of passing to a conditional copy twice, which Tao described as “somewhat magical”. We show here that the trick is not necessary for the proof, and avoiding the trick gives a simpler proof with a slightly better constant in the bound.

We start by defining

-spread families, a notion key to all recent proofs of the sunflower lemma. We use

as a shorthand for

We use boldface symbols to denote random variables, and non-boldface ones to denote deterministic quantities.

be a family of finite sets

that are not necessarily distinct. For

-spread if for all

is chosen uniformly at random from

The main technical part of recent improvements in the sunflower lemma happens in the proof of the following refinement lemma. We use the base-

be a finite set. For

chosen uniformly at random for

is an integer. Let

be a uniform random number in

There is a random number

(being not independent from

in general) such that

The proof of Theorem 1 using Lemma 2 can be found in Rao’s paper and Tao’s blog post, so we omit it here and focus on proving Lemma 2. Rao and Tao both proved a slightly weaker version of Theorem 1 but this weakness can be overcome using a minor twist observed by Bell-Chueluecha-Warnke. They also used slightly different forms of Lemma 2 but the differences are non-essential.

to a deterministic function of

without violating any property of the original

guaranteed by the lemma, because after conditioning on

one can fix any additional randomness in

is minimized. This more deterministic version of

can be somewhat more convenient for proving Theorem 1 and it was used in Rao’s proof, but allowing additional randomness in

that is easier to analyze.

We follow Tao’s idea of proving Lemma 2 using Shannon entropy, but we present the proof in a more streamlined fashion with a slightly sharper constant in the bound (Tao proved a version of Lemma 2 where the constant 4 was replaced by 5). Specifically, we present the proof in a way resembling a basic technique in combinatorics called counting in two ways: one can show that two quantities are equal by showing that they both count the number of elements in the same set. Here, we estimate the entropy of the same collection of random variables in two different ways, and prove Lemma 2 by comparing the two estimates. The way we obtain the two estimates relies crucially on the chain rule of conditional entropy:

taking values in a discret set. We say that equation (1) computes the entropy of

To prove Lemma 2, we obtain two entropy estimates for the same collection of random variables by applying (1) to two different chains.

be chosen uniformly at random from

be a random set satisfying

be a finite set. Let

chosen uniformly at random for

is an integer. Let

be a random subset of

Proof of Lemma 2. If there exists

is empty, we can simply choose

deterministically. We assume henceforth that

by creating a conditionally independent copy

have the same conditional distribution given

and they are also conditionally independent given

This construction guarantees that

almost surely, which implies that

It remains to prove that the

constructed as above satisfies

We achieve this by estimating

using the chain rule (1) via two different chains, one for a lower bound and the other for an upper bound. The lower bound is obtained via the following chain:

Namely, we apply (1) in the following way:

By the independence of

By the conditional independence of

and their identical conditional distribution, 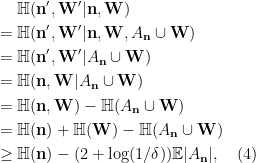 Now we establish an upper bound for

via a different chain:

Namely, we apply (1) in the following manner: 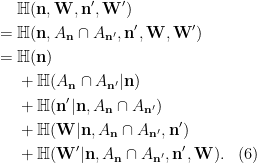 we get the following upper bound:

Comparing (5) and (11) proves the desired inequality

Acknowledgments. I would like to thank my quals committee, Moses Charikar, Omer Reingold, and Li-Yang Tan for valuable feedback and inspiring discussions.